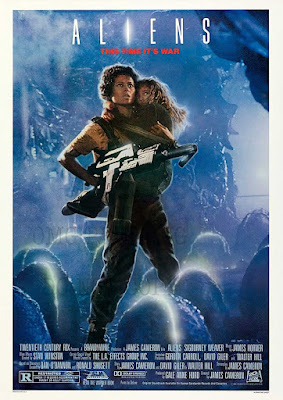 I recently had the chance to see Aliens on the big screen, specifically at the historic (and beautiful) Crest Theatre in Sacramento. When the movie premiered in July of 1986, I was a sophomore in high school. I saw the movie five times (at the Grand Lake Theater in Oakland) within the first two weeks of its release. Yes, I loved it that much. And, after my recent viewing, I can say I still love it that much. Aliens holds up really well. So much of this is due to James Cameron's expert directing. The set up here is intentionally slow-moving so the second half of the film feels like the ultimate thrill ride it is. The action sequences are some of the best ever filmed. Yet, the film really belongs to Sigourney Weaver, whose powerful and nuanced performance earned her an Academy Award nomination for Best Actress (the first time a leading actress in a sci-fi film had been acknowledged by the Academy). Weaver's performance is history-making for many reasons. Before this film, audiences had never watched a female character embody the gun-toting aggression Weaver's character of Ripley does. The character was an exciting first, showing that women could not only carry an action film, they could kick cinematic ass in the process (proven by the financial success this film was by becoming the seventh highest-grossing film of 1986). One of the many elements I love about this film is the layered story. Cameron's script is filled with emotional highs and lows, some fantastic character development, and many relatable themes (with motherhood being at the forefront). He wants us to root for Ripley through the end and achieves this by creating a bond between character and audience. Also of note is the infusion of humor threaded throughout the movie, from Bill Paxton's unforgettable delivery of "Game over, man. Game over." to Weaver's iconic delivery of, "Get away from her, you bitch!" Like many great films, this one spawned some not-so-great sequels, reminding its devoted audience that greatness of this magnitude can never be duplicated.