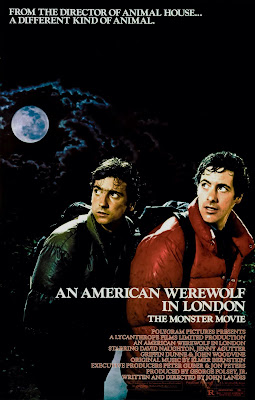 An American Werewolf in London is a brutal and brilliant film. Paying tribute to the great monster flicks of yesteryear, director John Landis serves up a terrifying cinematic homage to the creature feature genre, while breaking new ground in the process. The concept of the story is simple, reminding the audience of legends and lore related to a fateful attack by a werewolf. In this case, the victims are two American men backpacking their way across the moors in Yorkshire. Jack (played by Griffin Dunne) is killed and David (played by David Naughton) survives despite his injuries. As the film moves forward, David's insistence that his transformation into a werewolf is imminent is what fuels the movie. We, the audience, are aware that his change is coming and we wait for it with edge-of-your-seat anticipation. And what a change it is. It's worth noting this film received the first-ever Academy Award for Best Makeup and that accolade is well-deserved. The transformation scene in which David's body morphs into that of a werewolf is an iconic moment on film. An American Werewolf in London is also unabashedly sexy. When David meets nurse turned love interest Alex Price (played by Jenny Agutter with a subtle seductiveness rarely seen in films these days), the two bring heat to the film. Landis also infuses the film with a strange but appealing sense of humor. Never do we (the audience) take what we're seeing on the screen as serious as we should because comedic moments remind us of how wild of a tale this is. It as if Landis is making a commentary along the lines of Sometimes life is so intense, you just gotta laugh.