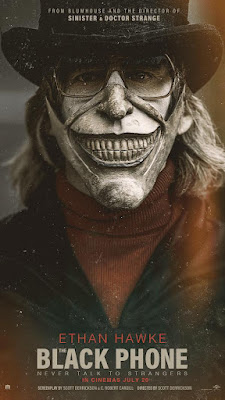 The Black Phone, a supernatural horror film directed by Scott Derrickson (Hellraiser: Inferno, The Exorcism of Emily Rose, Doctor Strange)  and adapted from a short story by award-winning writer Joe Hill, has a lot to say. In a single movie, The Black Phone is many things. Sometimes it's a family drama (a drunk father raising two children after his wife dies). Other times it's a psychological thriller (will a young victim of kidnapping find an escape from his evil captor?). And then there's the supernatural element (ghosts guide the main character to eventual safety and younger sister having visionary dreams related to missing children). Collectively, these story ingredients make the perfect blended recipe for one heckuva fun film. Sure, there's flaws along the way (our villain has very little backstory leaving us questioning why he does what he does). Yet, these minor issues are easy to overlook because they're eclipsed by brilliant cinematic storytelling, powerhouse performances, and nail-biting suspense. The acting is top-notch, specifically the performances by our two young leads, Mason Thames and Madeleine McGraw, who play brother and sister Finney and Gwen Blake. Both demonstrate incredible range and give two of the best onscreen performances in this genre(s) in years. I anticipate many great things from these actors. Ethan Hawke, as the nightmarish child abductor and serial killer called The Grabber, gives the most terrifying performance of his career. It's to the director's credit that our time with The Grabber is kept to a minimum, making us anticipate (with terror) his next appearance. Tom Savini proves his mastery yet again with the creation of one of the best mask in a contemporary horror film. Let's give this man an Academy Award already. Seriously, his artistry knows no limit. If you're looking for an edge-of-your-seat emotional thrill ride, look no further than The Black Phone. You're guaranteed an intense movie-watching experience.