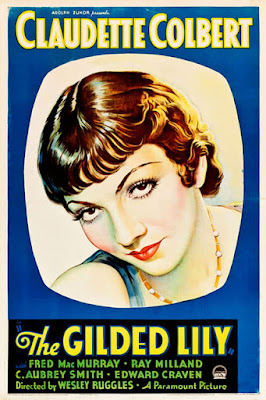 From the opening scene on a bench outside of the New York Public Library in which Fred MacMurray’s character (Peter Dawes) tries to convince Claudette Colbert’s character (Marilyn David) that she’s capable of more in her professional life, this romantic comedy from 1935 is brimming with sweet charm and a big dose of female empowerment. There’s much to enjoy in the story, including a commentary about journalism threaded seamlessly throughout. Colbert is especially appealing in her portrayal of an earnest, hopeful woman who’s trying to balance her quest for success with her search for love. Her comedic timing is razor sharp here and director Wesley Ruggles gives her the breathing space on screen she deserves to demonstrate her considerable range as an actor. Known more for her dramatic work, it’s refreshing to see Colbert in such a fun role. There are echoes here of the stellar, Academy Award work she did one year prior in the classic film It Happened One Night. Both MacMurray and Colbert make the most out of the clever, humorous script by Claude Binyon. Their chemistry is strong and natural. It’s no surprise this was the first of seven films they would make together. The supporting cast is equally enjoyable to watch, especially Eddie Craven as a young, impressionable photographer. It’s a shame he didn’t star in very many films. Also of note is the fantastic jazzy score, composed by Sigmund Krumgold, Heinz Roemheld (who would go on to compose The Lady from Shanghai), and Tom Satterfield. Watching the film, it’s hard to believe it was released in 1935. It feels much more modern and even contemporary. It could easily be remade today (Anna Kendrick should take note and turn this film into new gold), given how relatable and successful the single-girl-searching-for-love trope is and how effortlessly it works in this lovely film.