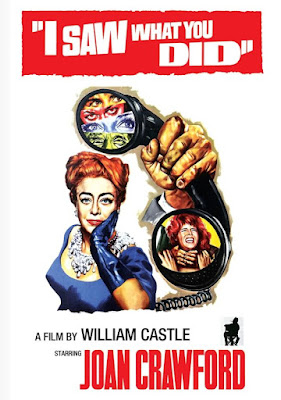 I love most films William Castle directed in his nearly forty year film career. This cinematic gem from 1965 is no exception. This low-budget no frills thriller is centered around a clever concept: two young woman prank call strangers one night leading them into a web of danger when they accidentally cause a murderer to panic when they inform him “I saw what you did, and I know who you are.” Believing what they say to be true, killer Steve Marak (played by a menacing John Ireland) is intent on finding the young women (played by Sara Lane and Andi Garrett who are believable as naïve high school friends, unaware of the consequences of their actions) to silence them. Castle knows how to create suspense on the screen. Here he gets the most out of a single idea, filling each connected moment with subtle terror before bringing us to the edges of our seats with a nail-biting ending. The film features Joan Crawford in a supporting role. Castle’s only misstep here is not making her part larger. Crawford, as usual, devours every scene she’s in. She deserved more screen time. Second only to Psycho (which this film pays cinematic tribute to, as well as other Hitchcock movies), I Saw What You Did features another frightening shower scene. The 1988 made-for-television remake is also well worth a watch.
⭐⭐⭐⭐🍿🍿🍿🍿