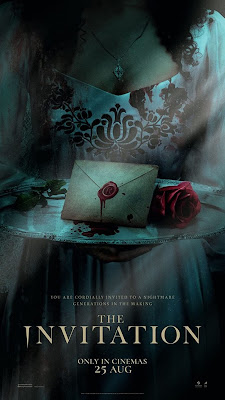 The Invitation, a new horror film from director Jessica M. Thompson, wants to be many things. At times, the film feels like a wonderful tribute to gothic horror romance novels of the past (there's even a Jane Austen reference in the movie for Northanger Abbey fans) and other times it feels like a solid entry in the cinematic canon of great vampire flicks. While watching the film, I caught intentional echoes of Dracula, True Blood, Interview with a Vampire, Midnight Madness, and even Downton Abbey. These influences and tributes are apparent, but there's so many of them they inadvertently create a strange hodgepodge of a film. It's as if the film is suffering from an identity crisis and isn't quite clear what it wants to be. Is it a ghost story? A movie about a haunted house? A supernatural horror film? A film about how far best friends will go to help each other? Instead, you're left unsure and confused. The film is enjoyable and fun, but it could've been groundbreaking on a higher level. I also had a tough time buying into the way the main character Evie ends up making her way from a somewhat hand-to-mouth existence in New York City to a posh new life in London in a matter of days. Using the results of a DNA test to move the story forward felt forced and implausible. In an era of cinematic greats like Get Out and Tigers Are Not Afraid, I wanted something more clever. The two leads, Nathalie Emmanuel and Thomas Doherty, bring much depth and likeability to their roles. Both are impressive in their performances. The supporting cast is also solid, especially Alana Bolden as Lucy. Yet, I found myself wanting to spend more time with the supporting characters than I was allowed to. Often, interesting characters are killed off just when we're starting to know who they are. Also worth noting is the exquisite work of cinematographer Autumn Eakin. The film is shot beautifully. While The Invitation is rich with creepy ambiance and the performances are top-notch, the movie feels uneven. There are some terrific, terrifying moments in the film, but they're often undermined by weaker moments that don't feel as realized.