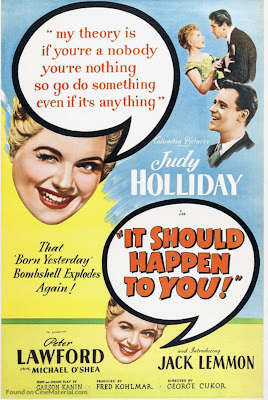 The always-charming Judy Holliday gives a brilliant performance in this romantic comedy from 1954. Produced four years after her career-making and Academy Award winning performance in Born Yesterday, Holliday proves (yet again) in It Should Happen to You that she was a force to be reckoned with. The fact that she's one of my favorite actors from classic films is no secret. As many have mentioned before, I will echo the sadness that her life ended way too soon (she died at the age of 43). It's a cinematic tragedy that she didn't make more movies. Here, Holliday plays fame-obsessed Gladys Glover, a down-on-her-luck woman who has recently been fired. To her luck (and his), Gladys meets a documentary filmmaker in Central Park named Pete Sheppard (played by Jack Lemmon in his first major screen performance). The plot focuses on Glady's climb to fame. Along the way, Gladys discovers that being famous is not as easy as it looks, experiencing many pitfalls in her humbling journey. While the theme of the film could be interpreted as a cautionary tale for a young woman wanting a career (instead of being content with being a homemaker), it is to Holliday's credit that the films says so much more, when director George Cukor gives her the space to do this. It's in her endearing performance that the audience feels her struggles: should Gladys conform or follow her dreams? Is wanting to be famous a bad thing? If the film is lacking anything it's the missed opportunity to change the outcome of the film by allowing Gladys Glover to thrive and succeed on her own and not make love a backup plan. Lemmon and Holliday have sweet chemistry and will have you rooting for their happy ending, despite the story possibilities of Gladys Glover's short brush with fame.