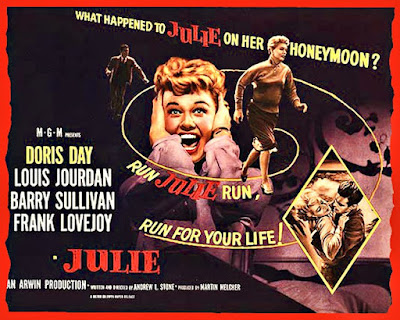 Julie is an edge-of-your-seat suspense thriller featuring Doris Day in one of her few dramatic roles. Day plays the title character of Julie Benton, a woman who is trapped in a volatile marriage to a insanely jealous man, Lyle Benton (played by Louis Jourdan). The first half of the film is about Julie's harrowing escape from her husband. Having being threatened that she would be murdered if she ever tried to leave him, Julie risks her life to get away. The second half of the film sees Julie return to her former career as a flight attendant, only to find herself on a plane with her homicidal husband as a passenger. As he reaches his breaking point and shoots the flight crew, there's no one left to land the plane except for Julie. The climax of this strange but thrilling movie was a precursor to Karen Black's iconic performance in Airport 1975 (who also plays a flight attendant who has to land a plane in the middle of crisis). It's a shame that Day didn't make more dramatic films. Here, she demonstrates tremendous range by showcasing her ability to play multiple levels in a single scene. Director Andrew L. Stone seems to be aware of the power of his leading lady, opting for closeups on her as much as possible. Day is such a strong actor, she's able to fill each silent beat with clear emotions, often with a slight shift of expression. The only stumble in the film is the casting of Louis Jourdan as the menacing husband. While he and Day certainly shared an intensity in their scenes, his performance could not match Day's layered, nuanced acting. She outshines him in every scene. While watching Julie, I wondered how much of an influence this film was on subsequent and similar films such as Sleeping with the Enemy or the recent remake of The Invisible Man (starring Elisabeth Moss in a role echoing Day's). Nevertheless, this fantastic film noir thriller from 1956 offers up a terrific and sometimes terrifying ride. At the very least, it will give you a new appreciation for flight attendants.