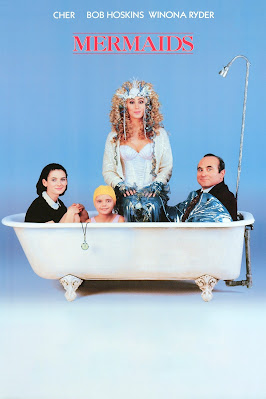 Adapted from the novel by Patty Dann, this coming-of-age family dramedy from 1990 is an adorable film, filled with charm, terrific and very quotable dialogue, and career-best performances. Set in 1963, the film follows the lives of three women, specifically a single mother and her two young daughters. Told from the perspective of Charlotte, the oldest daughter (played by Winona Ryder), Mermaids is endearing from start to finish. Director Richard Benjamin creates an intimate connection between Charlotte and the audience by allowing her inner thoughts to be shared through often hilarious voice overs. It's through these one-liners and monologues that our fondness for Charlotte grows, drawing us into the often-turbulent navigation through her young life. The characters of this film feel like people we know: you have the larger-than-life mother (played by Cher in her best role yet), her antithesis in the form of a conservative daughter, and the wild youngest child (a very young but impressive Christina Ricci) who possesses her mother's free-spirit while still growing in the shadow of her odd older sister. It would be easy to simplify this film as a mother-daughter tale, or even another film about a misfit growing up (in the 1960's). Yet, Mermaids really shines because of the heart and soul of the film. There are poignant moments that ring true taking place in a world that feels idealistic and hopeful yet bristles with brushes of reality, especially when it examines the tough transition from childhood into adulthood. The performances by the entire cast are masterful, including career-bests from Cher and Winona Ryder. Although he no longer makes films (sadly), Michael Schoeffling shows considerable depth and range here as the male love interest of a lovestruck Charlotte. It's impossible for him to ever escape his iconic portrayal of Jake Ryan in Sixteen Candles, but Schoeffling's understated approach to his role of Joe gives his performance a believable naturalness. Like the toe-tapping energetic soundtrack filled with iconic hits from the era, the fantastic score composed by Academy-Award winner Jack Nitzsche compliments every scene. Screenwriter June Roberts has filled the film with delicious dialogue. Many lines from this movie have taken on a life of their own ("Charlotte, I know you're planning a celibate life, but with half my chromosomes, I think that might be tough.") and are frequently quoted by the many fans of this wonderful, unforgettable film.