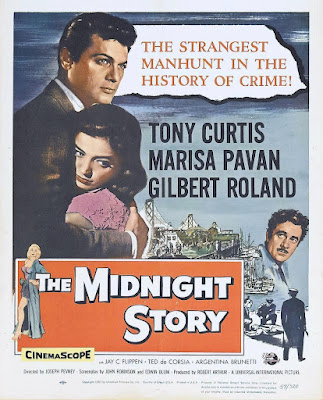 This dramatic film noir from 1957 is a fun watch. The plot is pretty layered, allowing for a few nice twists along the way. The story centers around a San Francisco traffic cop intent on solving the murder of a priest who was a father figure to him. He goes undercover, falls in love with a female cousin of the suspect, and comes up with a strategy to get a confession. Thanks to the screenwriters (John Robinson and Edwin Blum), the film is more character-driven, rather than relying on action. The character development is rich here, demonstrated in the writers choice to give the cast of characters complicated lives, including those of the police officers involved in the murder case. The acting is top-notch, including one of Tony Curtis’ best performances. Marisa Pavan and Gilbert Roland also shine in their roles, each bringing an intensity and beautiful desperation to the screen. Filmed on location in San Francisco, director Joseph Pevney keeps the story moving forward at a great pace. Also of particular note is the fantastic score composed by Hans J. Salter and Henry Vars.