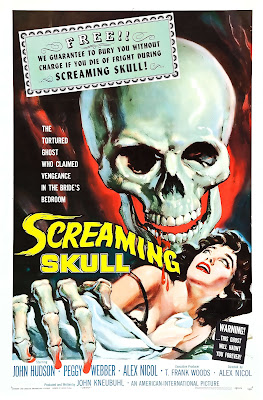 A lot can be said about The Screaming Skull. Is it over the top? Yes. Is it a great film? No, not really. Is it fun to watch? Definitely. The concept of the movie is fairly simple: a second wife is a victim of gaslighting by her new husband who is guilty of murdering his first wife, who haunts everyone she can. This low-budget gothic horror film from 1958 was directed by Alex Nicol, who up to this point in his career was known for his work as Broadway actor. Peggy Webber, the star of the film whose performance is nothing short of brilliant, loathed the movie stating it made it her want to throw up after viewing it (because of the quality, not because of any gore). Yet, Webber is a power house in her role. Her considerable acting skills are demonstrated in scene after scene as her character Jenni Whitlock is convinced by those around her (including by herself) that her sanity is slipping. Playing the scheming, homicidal husband, John Hudson gives an equally impressive performance. Adapted from a story by Francis Marion Crawford (who was inspired by folklore about the legend of a screaming skull), screenwriter John Kneubuhl infuses the script with empathy for Jenni, allowing the audience to fear for her safety, as well as root for her escape. I was fortunate enough to watch the Blu-ray version of the film, which Shout Factory released a few years ago. The picture quality and the packaging were fantastic.