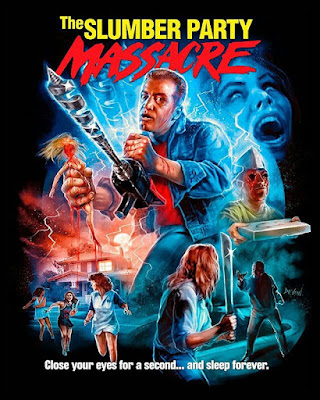 From the opening frame when the iconic title is splashed across the screen in blood red letters, you know you're in for a wild ride with Amy Jones's cult slasher classic The Slumber Party Massacre. Set in sunny Southern California, the 1980's aesthetic of beautiful surroundings are juxtaposed with a terrifying murder spree thanks to a power drill wielding maniac. Shot on a next-to-nothing budget, this mighty film went on to make millions and become a three-film franchise, similar to other successful slashers of the same era. This one stands out as being different from the pack. Sure, all the genre expected tropes are there. We have beautiful women being hunted by a serial killer. We have brutality and blood. There's a lot of T and an abundance of A. And, most importantly for my fellow horror film aficionados, we have a high body count. Yet, there's a stylishness to the movie that isn't always as prevalent in comparable films. Much of this is apparent in Jones's very effective directing (she knows how to pace a slasher film) and the masterful cinematography of Stephen L. Posey. In particular are the wide shots inside the high school gymnasium, filmed on a cherry picker to create the ultimate voyeur perspective. Jones also makes a very distinctive rule-breaking decision in not making her killer wear a mask. We know the face of danger from the moment he comes on screen (a role played in almost complete silence by a very effective Michael Villella). Overall, The Slumber Party Massacre is a film worthy of its devoted following, setting itself apart from similar films with artistry and an attention to story and craft. And, on the note of story, it's worth mentioning that the script was penned by feminist writer Rita Mae Brown, who would go on to write many iconic novels, including the acclaimed Rubyfruit Jungle, a book that makes a cameo in this fun and frightening flick.