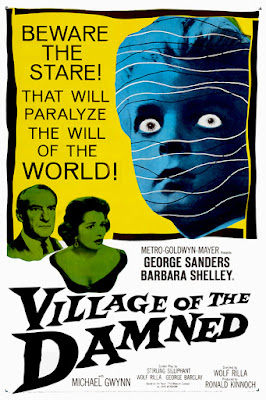 Movies don’t get much creepier than this fantastic classic from 1960. Director Wolf Rilla takes his time introducing us into the strange world of this sinister tale. In this case, we are in the British village of Midwich, where something strange has just happened: the residents of the village lose consciousness for four hours. When they awake, several women have been impregnated. Even more bizarre, all of the women give birth on the same day. The children themselves possess telepathy, all have a similar look (large eyes, blonde hair) and speak as of telling a cautionary tale. The children become the objects of fear and speculation by their fellow villagers. What follows is chilling to the point of terrifying. Peeling back the many layers (include the symbolic ones), Rilla masterfully creates beautiful suspense on the screen with help from cinematographer Geoffrey Faithfull, whose aesthetical choices are stunning. Visually this film has become iconic, known for its glowing eyes effect. It’s devoted following and critical acclaim are well deserved.