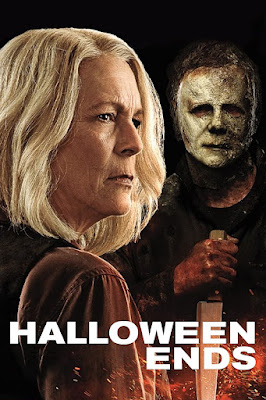 Halloween Ends is not a perfect film but it offers audience members a wild cinematic ride. The Halloween film franchise is loved by a very devoted fanbase (myself included; the original Halloween is my all-time favorite horror film). With that said, no matter what artistic choices director David Gordon Green made for this supposed final entry in the Michael Myers vs. Laurie Strode cannon, there was bound to be unhappy skeptics and intense scrutiny. Here, Green makes bold choices. Instead of following the prescribed playbook for all things slasher film, Green takes us deep into what feels like a dark character study, exploring the psychology of the hunted and the hunter. It's one major downfall is this: the plot feels like a hodgepodge of never fully realized story ideas and this weakness almost derails the film (it's predecessor Halloween Kills was dreadful and ranks as the worst Halloween film made - my opinion). Yet. Green knows these characters, their lore and legacy. He knows how to tell a scary story. What works here is the mesmerizing world we're submerged into (underscored by an awesome soundtrack). Lives are crossing and lines are blurring. We have super survivor Laurie Strode (played with a sweet intensity by the Queen of Scream, Jamie Lee Curtis), settling into a peaceful existence and leading a seemingly healed life. We also have bullied teen Corey Cunningham (played with fantastic complexity by Rohan Campbell, mostly known for his leading role on the recent TV adaptation of The Hardy Boys) sinking into a violent pit of no return. Both of these characters serve as great juxtaposition, each reflecting the impact violence and victimhood can have. Some of the production elements in the film are masterful, including the cinematography and the editing. Green takes his time exploring space and place, allowing the visuals to build and sustain the shifting moods of the movie. While Green gives us the battle we've been waiting for, when Michael Myers and Laurie Strode finally face off for a final time, the film is layered and offers commentary and thoughts on the often brutal society we've become. While Halloween Ends won't make everyone happy, it's a unique horror film on its own, brimming with an artistry rarely seen in contemporary horror films.