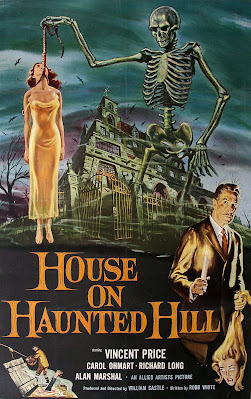 This fun flick from 1959 feels like a thrill ride, navigating viewers through a haunted house seemingly filled with creepy ghosts and moments of sheer terror. The concept of this spooky tale is fairly simple: a wealthy man (played deliciously by Vincent Price who knows a thing or two about horror films) gathers a group of strangers together and challenges them to spend the night in his home, which is reportedly haunted. Whoever survives the night will walk away with cash. The night takes a turn when the guests are informed they're actually trapped inside the house. There's no way out until dawn. What follows is a string of carnival-like pranks and frights, all intended to scare the guests away. The action of the night is paralleled with a subplot focusing on the marital discord between Price's character and Carol Ohmart's character, his wife. Directed by master of schlock William Castle (who was legendary for turning B-movies into surprise cinematic hits), the film is a feast of scary scenes, pushing the characters to their limits and ultimately to their breaking points. The cast offers top-notch performances, especially Carolyn Craig as a constantly terrified woman who does what she can to survive the night in the House on Haunted Hill.