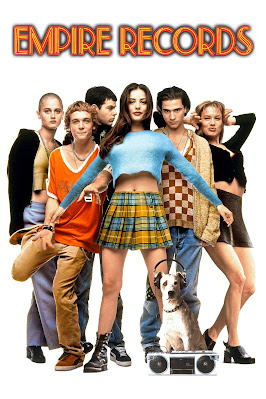 It's hard to believe that this cult classic from 1995 is nearly three decades old. While elements of the film have stood the test of time (including one of the best film soundtracks to ever be made), there are bittersweet reminders here that the world that Empire Records depicts no longer exists. For those who were around in the 1990's, this often poignant movie will hit your nostalgic sweet spot, making you yearn for yesteryears. Yet, sentimentality aside, Empire Records presents a romanticized view of retail life as we once knew it. The fact the film takes place in a record store (which have sadly become extinct - for the most part) and only a few other locations are shown, the movie possesses a theatre-like charm. At times, you can't help but wonder if Empire Records should really be adapted for the stage (hey, there's a musical in there somewhere). The cast is attractive and clever, tossing witticisms left and right in a style reminiscent of Dorothy Parker. Everyone here has something smart or sassy to say. It's only when the film tries to go deep emotionally that things feel more maudlin than they need to. Fortunately, director Allan Moyle (there should be no surprise that he also directed two other cult favorites, Pump Up the Volume and Times Square among others) knows exactly when to lighten the mood with comedic bits that would fit in well on any sitcom of the era (hello, Friends). Some of the actors here went on to huge cinematic success, including Renee Zellweger in a fantastic early-in-her-career performance. On that note, we need her version of the song Sugar High to finally get the record release it deserves. Her performance of it (albeit it's less than two minutes on screen) is alone worth watching the film for. That and a look back at a time where young people had cool jobs in cool places and listened to really, really cool music - on vinyl, even.