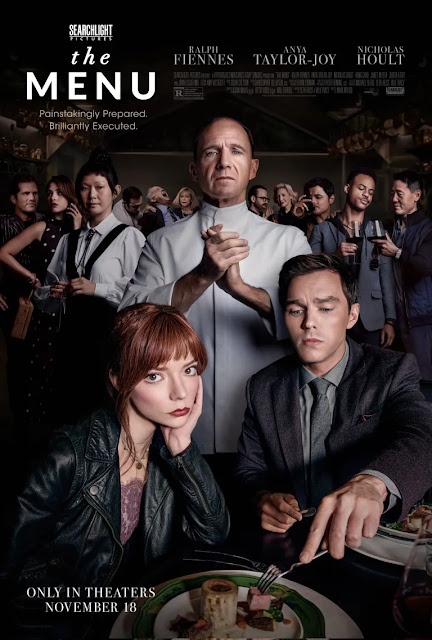 I hope you bring your appetite to this deliciously devilish film. The Menu, a dark horror comedy film directed by Mark Mylod, delivers every course it serves. Stylistic and aesthetically exquisite, this movie will be celebrated not only for its mesmerizing visuals but for it's clever script, expert direction, and nuanced performances from a cast of ultra talented actors, including a wonderful Judith Light (will someone please put this wonderful woman in more films?). The creepy premise feels simple: a group of self-obsessed strangers find themselves sharing a terrifying experience. They're the guest at a posh, elite private restaurant located on a secluded island in the middle of nowhere (or, so it seems). The first half of the film is a slow move, keeping the audience (and the characters) in one location: the dining room and adjacent kitchen of the restaurant. Mylod takes a chance by keeping us here for so long, but it's a risk that works because, as an audience member, I grew anxious and uncomfortable. Like the characters, I wanted to leave that space and escape. The one-location and ensemble approach feels theatrical, as if we're watching the first act of a play - specifically a Greek tragedy (one probably written by Aristophanes because of its dark wit). Much of the film feels like a cinematic connection to Plato's Allegory of The Cave. As fantastic as the supporting cast is, the film really belongs to Anya Taylor-Joy and Ralph Fiennes, each of their characters are similar in their quest for power, despite their seemingly differences in social standings. Taylor-Joy continues to prove her brilliant worth in yet another astonishing performance, certainly on par with her career-best performances in Thoroughbreds and The Queen's Gambit. Fiennes devours every scene he's in (which is most), giving a controlled, strategic performance that is as commanding as it is terrifying. High on eerie atmosphere and rich with wicked suspense, The Menu is a fun feast of a film.