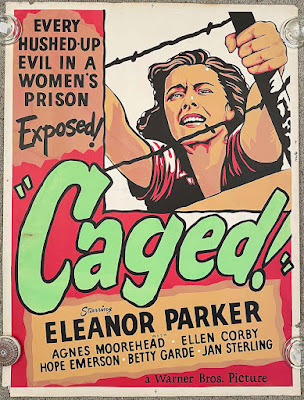 Long before there was Orange is the New Black or Wentworth, there was Caged. This women-in-prison film noir from 1950 is an intense, gritty movie that offers an in-depth look into the complicated lives of its characters. Adapted from the story Women Without Men by Virginia Kellogg and Bernard C. Schoenfeld, the script (written by Kellogg) holds nothing back. While the drama is certainly heightened, the film is remarkable in its seemingly realistic depiction of prison life for women (at least for the time it's set in). Kellogg gives us relatable characters to root for and loathe, portrayed by a talented cast of women including Eleanor Parker in an Academy Award nominated lead role, Betty Garde in a heartbreaking performance as homicidal shoplifter Kitty Stark, and Agnes Moorehead as the sympathetic prison superintendent Ruth Benton. A prison movie wouldn't be true to genre without a villain and Hope Emerson gives us a ruthless one in her sadistic portrayal of the evil prison matron Evelyn Harper. A character shouldn't be this much fun to hate. Emerson devours every scene she's in rightfully earning an Academy Award nomination for Best Supporting Actress for her role. There is much to admire about this brutal yet compassionate film. Yet, the standout here is the brilliant performance of Eleanor Parker. Her transformation from meek to corrupt is breathtaking to watch. A true ensemble film, Caged is a daring, brave exploration of women shunned and forgotten by their society. Fueled by unforgettable performances and a solid script, acclaimed director John Cromwell has delivered one hell of a great movie.

December 09, 2022
From start to finish, Empire of Light is an exquisite film. Set in the early 1980's in a beautiful, vintage cinema in a quaint English seaside town, the film explores the complexities of the lives of those who work at the movie theater. While it's certainly an ensemble film, Olivia Colman's brilliant performance coupled with Micheal Ward's nuanced portrayal of her unexpected leading man allows both to shine in extraordinary ways rarely seen in contemporary films. Their performances are masterful individually, yet equally powerful as a poetic duet of two seemingly different people impacted by the collision of lives. Featuring a sensational supporting cast that includes standout performances by Toby Jones, Hannah Onslow, and Tom Brooke, Mendes creates a bittersweet extended family out of his characters all connected by place, something anyone who has worked in a similar public-serving job can relate to.  At it's core, Empire of Light is a fascinating and sometime bru
Post a Comment
Read more

January 20, 2023
Watching Shawn Levy's sci-fi action comedy The Adam Project is a fun, thrilling experience. The concept of the film is clever: a fighter pilot travels back to a specific point in his life, only to meet (and bond with) his younger self. The always-charming Ryan Reynolds is our leading man, playing the grown-up version of Adam Reed. Reynolds continues to prove he knows a thing or two about being funny. Here, his comedic timing is sharper than ever, evident each time he delivers hilarious lines of dialogue. The pairing of Reynolds with young actor Walker Scobell (who plays a 12-year old version of Adam Reed) creates a fantastic comedic duo. Their dynamic is very enjoyable to watch. They are surrounded by an all-star cast, appearing mostly in supporting roles, including Mark Ruffalo and Jennifer Garner (both should've been given more screen time), and a devilish performance by Catherine Keener as an ultra-villain who you will love to hate. At the heart of the film, this is a good
Post a Comment
Read more