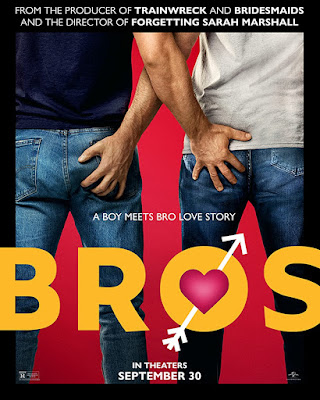 Billy Eichner's has broken new filmmaking ground with this charming, hilarious romantic comedy. Although fairly formulaic (the film checks many required romcom boxes), the movie sets itself apart by telling the story of two men falling in love, played by Eichner (who also co-wrote the script) and Luke Macfarlane (Brothers and Sisters and many Hallmark Channel movies). It's to director Nicholas Stoller's credit that Bros moves forward at a brisk, enjoyable pace. Even during the lengthier scenes in which our two leads talk through their feelings (including a very powerful, passionate monologue delivered by Eichner), the film never feels stalled or sluggish. It's only flaw is this: Bros tries to please everyone and in doing so feels a bit overwhelming with excess that distracts us from the love story. There's a lot of (sometimes heavy handed) political correctness happening that feels as if the creative team were trying to fill the movie with as much as possible - instead of just focusing on two people and their complex romantic journey. We also don't get to spend nearly enough time with the wonderful cast of supporting characters, especially Guillermo Diaz and Jai Rodriguez. We're also left in the dark regarding the dream of Macfarlane's character to become a chocolatier. Yet, there's much to love about Bros, from the fantastic soundtrack, to the exquisite cinematography (terrific film work by Brandon Trost), to the happy-for-now ending. The movie will make you laugh, make you think, and make you fall madly in love - at least for a couple of hours.